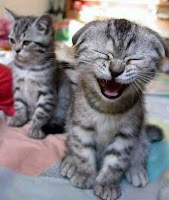 Once again I called my lawyer on Friday and left his assistant a not so nice message. I told her I wanted an update and not one that just consisted of her saying 'When I hear something I'll let you know". I told her that was not good enough. I demanded to know what was going on, if we were going to trial, if they were going to settle or just what the hell is happening..

Today, this morning actually, she called me back and informed me, the insurance company for the people we are suing called my lawyer last week and made an offer. When she told me the number I can honestly tell you, I haven't had a good laugh out loud belly laugh like that in a very very long time. Their offer? $6800.00... I almost fell off the couch laughing.. I just couldn't help it. It was so hilariously stupid!

They have the estimates from legitimate companies on what it will cost to fix the damages that were caused by the builder not building the house correctly in the first place which tallied up over 80 thousand dollars and they come back with an offer of $6800.00??? How can you NOT laugh at that...

I was then told that my lawyer also laughed at them and it was left off that the lawyer for the insurance company was going to go back to the company and see if he could get more money out of them.. More money? They better come back with a boatload after that silly offer.

I asked what could possibly be the reasoning behind that offer, I mean, I understand that of course, they would low ball it but that was beyond low ball. That was like, not even in our universe. Well, the insurance company doesn't think they should be liable for that.. Well guess what, they ARE. Thats why the jackass who I am suing had them as their insurance company.

If they come back with yet again, another ridiculous offer, we will then be going to court where it will be up to a jury to decide who gets what, if anything. I was told this should happen by the end of September. So, once again, I will just wait and pray and pray a lot..
at August 11, 2008