A Lesson in Love 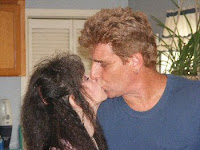 October 2nd was Mine and Lou's 10th Wedding Anniversary. I still can't believe we've been married 10 years already. For the last two months I fretted over what in the world would I buy for this man who doesn't wear jewelry and doesn't golf. That seems to be the types of gifts that are geared towards men but, I wanted to get him something special to mark our 10 years of marriage. As the days dwindled down to the 2nd I became more and more anxious because finances are about as bad as they can be at this point and even if I did find something nice to buy for him I couldn't afford it so by now, the guilt was starting to set it.

Well, it was finally here. It was midnight on Oct 2nd start of a brand new day and, I had no gift and suddenly in my sadness and guilt I realized something. I had to take a look at who Lou and I really are. We are simple people. We don't put the worth of our love in something that can be bought from a store. We don't put the worth of our love in a price tag. A great night together for both of us is something as simple as cuddling on the couch watching a movie together. And so, it finally hit me. It was like God turned on a light bulb in my brain.

I realized there is no gift ever created that I could ever buy that could ever let my husband know how much I loved him, how happy I am with him, how proud I am that he is my husband. Instead, I sat down and wrote him what I called and "Anniversary Letter". It said all the things no store bought card ever could have and no item from a store could have. I printed it out on nice stationary and gave it to him in the morning. He was so touched by my letter that he immediately put it away so nothing would ever happen to it. He knew what it took me some time to understand that the most precious gift that can ever be given is ones heart and love and thats what I give him all the time and what I gave him on our 10th wedding anniversary.

There was no huge dinner, no theater, no special event it was just Lou and I being, well, Lou and I and it was actually quite a perfect day for both of us.
at October 04, 2008