To Be or Said to Be? (Not For the Squeemish) 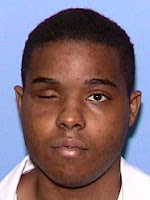 I have to admit that over the years my view on the death penalty has changed somewhat.I guess it comes from my religious belief that every human life is sacred because it's one of God's creations regardless of what kind of soul lurks within that human life. So,in believing this I feel that it is wrong for any human to destroy one of God's greatest creations. While I thank the good Lord above I have never had to deal with a family member of mine being murdered, and it could be said, that maybe if I did my view would be different but, it is a question I've often posed to myself and I still think I would be against the death penalty. Why? Well,murdering one of God's human creations will not bring back my loved one but, I don't say that the offender shouldn't be punished. Now, what about the case of mental illness?

Here we have a 29 year old man who killed his estranged wife, their young son and her 13 year old daughter. Horrific? Absolutely. But, while in custody awaiting his trial in 2004 this same man plucked out his own eyeball.. Now does that sound sane to you? If it does then, you would be in the same majority with the judge who ordered that this guy was fit to stand trial.. Now, who in their right mind plucks out their own eyeball?!?!? Not only that but, he has a history of mental problems yet, a judge still declared him fit to stand trial. Well as you can assume, he was sentenced to death and has been sitting on death row in Texas ever since.

Well guess what? This same person who was deemed "fit to stand trial" just plucked his other eye out, the only one he had left and then he ate it!.. Yes, you read correctly, he ate it. Now I ask you , does that sound sane to you? It's more than obvious this person is severely mentally ill. Does he belong on death row? I don't think so. I think he belongs in a hospital for the criminally insane for the rest of his life because he clearly does not have a hold on his faculties and is most certainly not fit for anything but medication and therapy probably for the rest of his life.

Now before I am called a bleeding heart liberal let me make myself perfectly clear. I do feel horribly about the loss of the victims in this case. It's an absolutely tragic thing that happened and the pain that was caused I am sure will never be healed. The loss of three lives, two of which hadn't even begun to live life yet is just beyond words but, I also can have compassion for the mentally ill and it's more than evident that this death row inmate is insane and as I see it, once again the justice system has failed. It's easier to lock em up, throw away the key and one day flip the switch than it is to take our heads out of the sand and realize that in our society today, we have a problem with mental illness of epidemic proportions and until we face this and deal with it you will see more stories just like this one.
at January 10, 2009