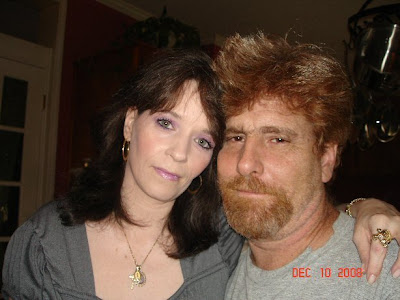 As most of you know my husband has been going through hell and back with his back. Up to this point he's had 5 back surgeries with the last fusion being this past January 2009. We had a lot of high hopes riding on this surgery. That he would be out of the horrendous pain he's been in for over a year, he could get off all the massive drugs for pain he's been on, he could do some of the things he loves, like fishing and gardening.

Sadly, and I hate to even put it into words but, we think he may be looking at yet another surgery. We aren't sure yet but it sure is looking that way. See if you can follow me here.. In 2005 Lou had a 2 level fusion of L4,5 and S1. Those are the discs that are by your tailbone. The very bottom. That surgery entailed the doctors fusions those bones together and holding them together with rods and screws. Unfortunately any relief he got from that was short lived. In the end of January of this year, it was decided because of the horrendous amount of pain he was in, it was time to go in and fuse the next set of discs above the original fusion. This one would be a 3 level fusion. While they were in there, they were going to remove the metal rods and screws from the first fusion and continue up to the next set.. All this was done and at first, Lou did feel better. All the horrendous pain he was having seemed to be gone and we 'really' thought this was it. Finally, something helped and he could once again get back to his life..

This bubble has since been burst because it seems that his pain has returned, worse than before but now it's back where it was originally where the first fusion was done. The one they removed the metal from. We saw his surgeon on Monday of this week who agreed that although back surgery is never a guarantee, Lou should not be in this much pain. He also agreed that something may not be right where the first surgery was performed since taking out the metal from there so, on Tuesday at 730 am of next week Lou goes in for yet another MRI to see whats happening in there.

The surgeon also said this "could" be a problem caused by his pain medications. You see, when a person is on pain medication for a long time your brain actually creates what are called pain receptors. The longer you're on these meds the more pain receptors are created. This is how medical dependency on drugs happens. It is VERY possible that if they were able to titrate Lou slowly off the medication his pain could improve. I know that sounds nuts but you have to understand. When you have all these pain receptors constantly being created those receptors make your pain worse by craving more and more medication. As I said, this is how addiction works. With anything.. So, if nothing shows on the MRI and they can get him slowly down in the dosage of meds, although it will be pure hell to go through, it's possible his pain may get better but, we will have to see what the MRI shows. I hope I didn't confuse you all..

As of today, it doesn't look good no matter which it turns out to be because both options suck and, Lou is in horrible pain and for myself, it's VERY frustrating because I can't help. I can't make his pain better, I can't stop it, I have no control over it.. So each day, Lou and I have to just hang tight to each other and make it to the next day and thats what we are doing...
at May 08, 2009