Different Yet The Same... 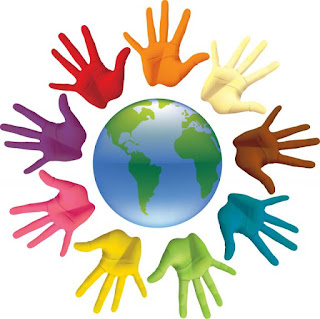 I have been wanting to write about this topic for a while but I have been wrestling with what words to use to express myself so that I am understood correctly..My hope is that you will see how I feel in my words and not be confused... If I come across in the wrong way please let me know.. I welcome all comments..

The topic I am talking about is homosexuality.. I have stayed away from it for one reason and one reason only..I have a very dear friend of mine whom I happen to love very much and didn't want to have my words misunderstood and possibly take the chance on hurting someone who means so much to me but, tonight I can no longer be quiet. My friend, whose name I will not use unless he gives his permission happens to be a gay man and also has his own blog. He's gotten comments on his blog from the very loving to the down right cruel..and it is the cruelness that I want to touch on..

Many years ago I used to think that the name calling and bashing and judging of others was just a normal part of life, that there was nothing wrong with it cause what the hell, everyone did it right? Wrong....It wasn't until I got older that I saw just how very deeply wrong all of these actions are. My own mother for her entire life I had never known her to ever discriminate or speak badly of anyone. Even if she didn't like the person she lived by the rule, if you have nothing nice to say then don't say anything at all.. Just think if all people lived like that what a wonderful world we would live in .

As far as people who are homosexual, people need to realize that your sexual orientation does not make you, who you are. On the other hand,there are those who seem to want to flaunt the fact that they are gay and that is something I still can not understand..Why do I need to know what you do in your bedroom? I don't announce what I do so why do you feel the need to? I also don't understand these "gay parades" where men and women walk the streets half dressed, some not at all, others having painted their bodies all different colors and yet others wearing some medieval torture device supposedly used for sexual acts. These things I will never understand or approve of.. I don't see what the reason is behind it.. Some gay people will say, "it's because we are proud of who we are"..my reply is, well OK, thats all well and good but why parade it down the street? I am also proud of who I am but you don't see me running amok in the streets...There simply is no need for and it is these types of people that make it very hard for gay people in society when it's already hard on them to begin with..Many many gay men and women have been tortured their entire lives by the fact that they are attracted to the same sex. Some have had their entire lives destroyed because of it, some have lost their lives and others have taken their own lives because of this very reason.. Just for a moment, stop. Read again what I just posted.. Can you imagine living with feeling like that? Can you imagine yourself being afraid for your very life because of who you're sexually attracted to? That has to be one of the worst mental sufferings..Can you not understand and have compassion for someone who deals with things like this? I hope you can. Please don't harden your heart because you don't like it or don't agree..A hard heart is not easy to cure...

My friend posted to his blog tonight in response to a so called "Christian" woman who was very upset by the fact that he also posted on his faith blog things about being gay. This is where I become saddened. I am a Christian, a Catholic Christian which means no matter what denomination that woman is we are, sisters in Christ because Catholic means universal which means ALL Christians even though we worship and believe some differences. People like this woman who labels herself Christian make the rest of us look just horrible. She makes people like myself look like some "Christian hating hypocrite" which sadly, I have learned in the south, there are a lot of . But, as for myself I am not a hating Christian. I am a loving Christian. I love and have compassion for all peoples even the most despicable. I will admit to you that it isn't always easy to find compassion and understanding for someone who has maybe, committed the most horrible crimes known to man but I try and dig deep to find some. You're probably wondering why? The answer is simple. I believe in God. I believe in Jesus Christ and his message to us among other things was and is "Love others as I have Loved You"..Think about that for a moment. The Lord didn't say "pick and choose who you love" He said, "Love others as I have loved You" and Jesus loved everyone.. He did not discriminate against anyone. Disapprove of behavior, yes. Hate the person? Never...

If you are a Christian and you say you believe in Christ then you MUST live by his commandments and teachings otherwise you are only half a Christian and honestly? There is no in between. You either are or you aren't. The lesson I learned from the Catholic Church and mostly from Pope John Paul ll and Mother Angelica is as Christians we don't have to like what a person does or says but we must love them as hard as that may be.. And the same love must be extended to ALL peoples and yes, that includes those who are homosexual. You don't have to like the way they live but you MUST love them. I have been taught, "Hate the sin but NEVER the sinner" after all we are ALL sinners in one way or another. We all do, say, act and maybe even live in ways that others do not like but that is no reason for viscous animal like cruel behavior. You don't have to agree and say something is OK if it's against what you believe but you must not and should not persecute the person because you don't agree and, just so you know, this has absolutely "nothing" to do with being politically correct because, anyone who "really" knows me, knows that I am a lot of things but, politically correct is definitely not one of them. It has to do with love for our fellow man and or woman. Respect for human dignity and the gift of human life which God has blessed us all with... Once we lose all respect for human life and human dignity there's nowhere else to go but down on a speeding train that eventually will hit rock bottom and when it does no one is safe.

In conclusion, if you are Christian and even if you're not remember this commandment from our Lord "Love others as I have loved you"
at August 02, 2009