My medical voyage begins once again so, I thought I would give an update..I don't want to jinx it but I really hope this time things work out because I'm so super tired of seeing doctors who look at me like I have ten heads... Today I left home about 9 am and headed north to a town called Florence to see a new digestive doctor. 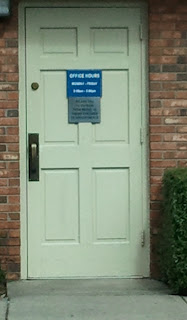 We of course got lost as soon as we got there because I am horrible at remembering directions. So after driving up and down the same street three times and calling the office twice I finally found the place. I actually passed right by it twice.. ...I thought I was going to be late but it turned out I was right on time.. I wish the doctor had been. I had a 10:45 am appointment and I didn't get put back into a room until almost an hour later.. Needless to say, I was not too happy. Anyone who knows me also knows I am the worst when it comes to waiting on anything.. Something I need to work on although, I give myself snaps for today because while I was unhappy about the wait I didn't start getting all worked up like I usually do. So see, I am getting better at it albeit, slowly. 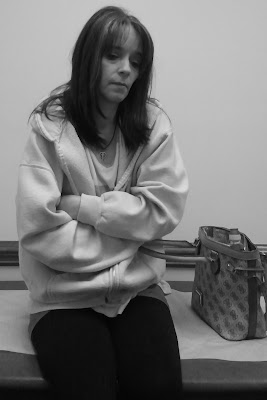 Yeah, wasn't looking very happy here. I was tired, cold and I had a headache. Just wanted the doctor to come in, get the exam over and start heading home.

The doctor did finally come in about 15 mins after I was put back in an exam room. Not too bad on the wait time there considering there have been times I've waited in an exam room for almost an hour alone.  The doctor was alright I guess.. He's a specialist and anyone who's been to one of those already knows they have a less than stellar bed side manner but I expected it.. After we spoke for a few moments about symptoms etc he had me lay down on the examining table and he started poking around my entire stomach from bottom to top.. Can't lie.. It did hurt but I didn't expect it not too..Then he did something no one else had ever done before.. The brief conversation went something like this:

He put both hands on either side of my ribs and literally shook my entire body actually. It was quite funny.. I was just looking at this man like "Okay, I don't get it but I guess you do".. I have learned that the less questions I ask sometimes the better off I am.. After he shook me he then listened with his stethascope for a moment or two and told me to sit up. I wonder what he heard in there? Answers to all the secrets and questions of the universe? I doubt it, probably just a lot of gas rollin around...

He then said he was concerned that I have whats called a Motility problem. He gave it a name but the only thing I can remember is it's "Some long name- esophagistis)... For those who don't know what that is, in the simplest terms, it means your throat (esophagus) muscles no longer work the way they should in order to propel food downward which would explain why I have lost my ability over the last 9 years little by little to swallow most solid foods. He said even though thats what he is thinking he can not be for sure. He wants me to have another endoscope which I will on March 1st where he will take another biopsy of my stomach and two of my esophagus which I have never had before. I know what he's looking for. One, he's looking for cancer and two, he's looking for a pre-cancerous condition called Barret's Esophagus.

He also mentioned a possible 24 hour Motility test which kind of made my hair stand on end because I know what that is and all I will say for right now is, it is NOT pretty and its painful but he said, lets to the endoscope first and see what I find and go from there. I am good with that...I was surprised at myself that I wasn't scared when he mentioned the scope, I have had one before but even though I've been sick for almost 20 years, I am petrified of medical procedures but this time, I'm not.. I'm rather calm about it.. I've had one before so I know what to expect and the other reason is, I have given my life in its entirety over to the Lord.. I am in His hands and whatever will happen is going to be His Will and not mine.. I'm Okay with that!  I also have another reason for my lack of major fear as well but I'll leave that for another post. 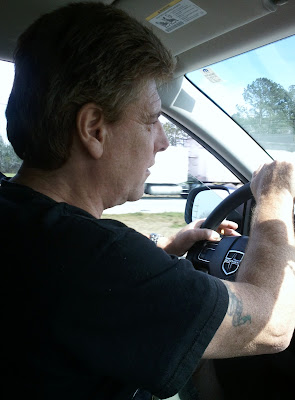 It was now after 12pm, everything was discussed in brief, exam was done, I was freezing, had a headache and just wanted to start the travel home.  I had driven there but was not really feeling well enough to drive the hour home so I was happy Mr L pushed himself to drive us home.. He has a hard time driving because of his back but today, he had no choice and he came through for us. 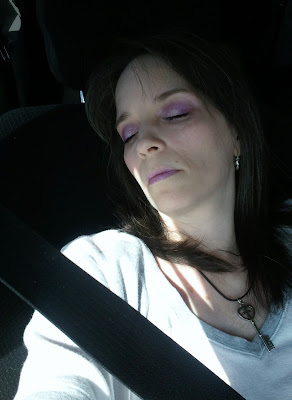 I must have been more tired than I realized because usually I can not sleep in a car.. I just can't relax enough but I guess after all the poking and prodding and the headache I had, it was the right combo and I fell asleep half way home..

So that's my update for today..when I know more, you will too!
Thank you to all my friends on FaceBook who prayed for me today. They obviously helped more than you could realize. ...
at February 17, 2012