I couldn't let the day end without putting up a post in memory of one of my favorite actors, Ernest Borgnine. It was reported that he died today at the age of 95. No cause of death was given but I think at 95 does there really need to be one?.. He was blessed with a very long life that most don't ever get...Ernest was never a leading man, he didn't have the
"Hollywood looks" needed for that but, he had loads of personality and major talent that he brought to every role he played.

One of my favorites of the roles he played was the Centurion in Franco Zeffirelli's "Jesus of Nazareth" pictured here. 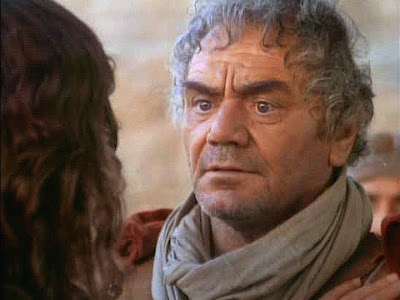 But I would be remiss if I didn't say that my all time favorite movie in which Ernest played the leading man and won an Oscar for was 'Marty' which was released in either 1955 or 1956.. Pictured here is Ernest Borgnine as "Marty" 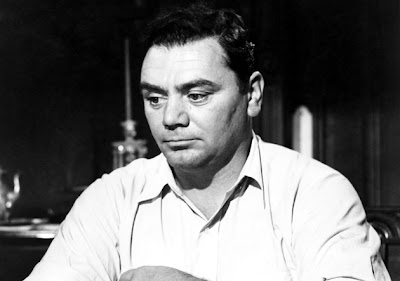 If you haven't seen it I highly recommend it.. It's a very nice movie about an Italian man in his 30's who still lives home with his mother and everyone wants to know when he's going to get married or how because he still hangs out with the same guys he went to school with doing the same old nothing which, back in those days was very common for Italian boys.. It hits home for me because I am Italian and if you come from an Italian family the movie while it is really great for anyone to see , may even mean more to you because you'll understand more about how the characters lived and why..

So on this day, I say, "rest in peace Marty".. thank you for sharing your wonderful talent with all of us and you will be sorely missed....