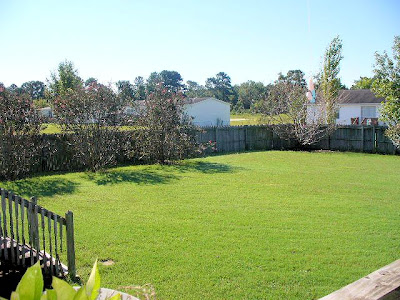 This photo is part of my back yard in the morning. 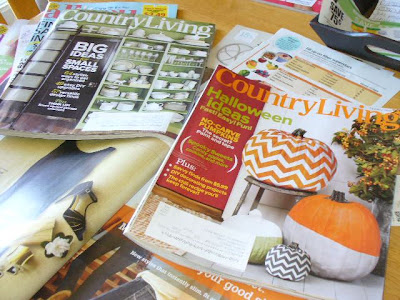 I sat at the kitchen table this morning listening to the birds feeling the cooler air on my skin for a while and finally decided it was time to go through my magazines that have been hanging around for months and take out just the articles that I wanted to save.


And then I had this recipe for the longest time that I picked up from another blog somewhere for "The Perfect and Easy Roast Chicken"...


One of the directions when putting the chicken into the roasting pan is to "fold the chickens wings under the bird like if you were going to put it's arms under it's head".. Hmmm, OK... So I tried this and no matter how I tried, the birds "arms" flopped back out.. Then Mr L tried and the same thing happened. I tell you it was like watching a Laurel and Hardy episode.. Right there I should have given up but I pushed forward.. Since I couldn't get the arms behind the chicken I left them.. The recipe also said "Do not cover and cook on 450 degerees for 40 mins. Now, Im scratching my head and I'm thinking "40 mins? there's no way this chicken is going to cook in 40 mins" but, once again I soldiered on and kept with the recipe. Forty minutes later the timer went off . I pulled the chicken out of the oven and as I suspected it was no where near done.. Back in the oven it goes..Unforunately I was now so confused that I let it cook too long and it dried out. 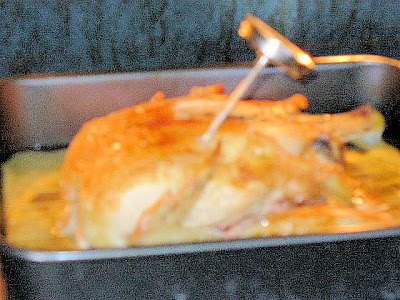 Sorry the photo is so blurry. For some reason no matter how many times I took the photo it still came out blurry

The moral of this story for me? Next time I make a roast chicken I will do it as I always do and have a juicy, fully cooked roast chicken dinner with the chickens "arms" by its side!..