In the other days post I told you I received two other blessings on Friday besides the love of my nephew via USPS and that I would write about them in my next post.

Blessing number two came in the form of a letter that I had wondered if I would ever receive. You see, I am part of The Missionaries of Charity Order that Blessed Mother Teresa began so many years ago.. If you don't know know who she is or what the order is you can read about it here.


This is Blessed Mother Teresa.

Mother Teresa started a branch of her Order many years ago for people who wanted to be part of the Missionaries of Charity but couldn't take Holy Orders because of poor health so she began what is called "The Sick and Suffering Co-Workers of The Missionaries of Charity" and this is the branch I belong to. How it works is, I am paired up with a Sister of the Order somewhere in the world. She and I are united through daily prayer. We pray for each other every single day. I offer my sickness and suffering to God for her and she does the same with her daily crosses. Mother Teresa called her S&SCW 'her other self" because we are so closely united through prayer its as if that person is part of us. My Sister happens to be located in New Delhi India. She does her work at a home Mother began for disadvantaged and mentally ill children. The ages range from 0 to 18 years old. Her name is Sister Annliese, M.C. . I had sent a letter to Sr. Annliese many months ago but it was highly probably it wouldn't reach her because getting mail through to some, or most parts of India is not easy especially in the area's where the M.C.'s sisters work. So I sent it off full of my love for her and prayed that maybe one day I would hear from her. If not I was OK with that too. We are united in prayer and through Gods love we will know each other..

Well last Friday I finally received a reply back from Sr. Annliese MC. I was SO elated! 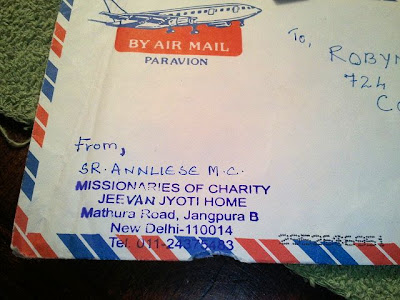 I got to learn a little about her personally and spiritually, also about the work she does..Her letter to me like mine to her, was so full of love for God, the children she works with each day and for myself. I don't ever have to lay eyes on Sr. Annliese to know she is a beautiful soul. I feel even more connected to her now having received a letter and she said she will write again soon. I absolutely can not wait!

Blessing number three came to me on Christmas Eve. Mr L and I have been having some very hard financial times with he being so incapacitated before and now after surgery recovering. I've had to pay for services that I didn't need to before up until about May of this year because Mr L was pushing himself even in his horrendous pain to do these things until he finally couldn't anymore. I had to hire someone to come and cut my lawn, front and back (we have 1/2 an acre) two or three times a month depending on how fast the lawn grows. Each time was $35.00. Then there is the heavy cleaning such as washing and vacuuming floors, scrubbing the bathrooms all of which I physically do not have the ability to do so that means hiring someone to help. Cleaning help is not cheap in any way. I had Merry Maids for a while but at $150.00 every two weeks, it did not last very long. We just couldn't swing it financially. Turns out a local girl here cleans homes and she gets $85.00 each time which is very cheap for this kind of help. I've been struggling for months now to have her come because we need a clean home and its been getting harder and harder to pay for her. I began taking from our food money to pay her for the help. And then there is the garbage pick up that needs to be paid for. We could take our trash to the dump but thats another duty I do not have the physical capacity for so I had to hire a trash company to come and pick up once a week. I was able to pay for them until March 2013.

A few months ago I began chatting with a woman I met on Facebook. We have never met in person but just hit it off online. She wanted to know what was happening with my husband and asked about my health and our lives etc. I guess it was in November she contacted me and asked me what kind of help I needed and I was honest, I told her financially we are really struggling but so is everyone I know so what we really need is a lot of prayer....She told me her friends from her parish wanted to know how they could help, once again I said prayer..

Christmas eve I went to get the mail and there was an envelope addressed to me from her. I thought how nice of her that she remembered Mr L and I and sent us a Christmas Card. I opened the letter and inside the card...... was a check for $500.00!! She and the people from her parish who I do not know at all got together and chipped in to send us this money.. This check will now allow me to have cleaning help for almost three months time. All of these people who donated are complete strangers. I can not tell you how completely humbled Mr L and I were and still are. It was a blessing straight from heaven because I really didn't know how I was going to keep paying for the cleaning help. It amazes me how God seems to always know who to put in our path and when. He never ceases to amaze me..
at December 30, 2012