Its been a few days since my last post. Been busy as usual but it's all good..

On Monday December 10th which is also Mr L's birthday, the big 55, we went to our doctor and had all his stitches removed from his back. All 52 of them. It took a while and I can't say it was painless but he got through it and was done within a half hour or so. It didn't help that our nurse Michelle who we really like kept telling Mr L. that she has never taken this many stitches out of one person at a time.. He was already dreading having them taken out because it's been three weeks and alot of them had scabbed over already. Sorry for the visual there. Michelle used some kind of spray that would freeze the skin so that helped dull the pain too. Now he just has a fourteen inch incision scar up his back. I was going to post a picture of it but I have to be honest.. It's uuuuuugly..Kinna looks like Frankenstein and if I have a hard time looking at it which is highly unusual for me I didn't want my readers who have even weaker stomachs than I to end up tossing their cookies because of a post on my blog. See how I think of you all?
I'll start putting Vitamin E oil on it soon in hopes it will heal a little nicer..

I also had some X-rays done on my back and left hip. I've had a lot and I mean a lot of pain in my back and hip for about 2 months now. It's interfering with my sleep and I've lost the ability to be able to twist my body in certain ways because it hurts too much. According to my doctor, there is a small amount of arthritis in my hip and back. Arthritis? I'm only 42? Seriously?!?! He also said if I wasn't complaining he would think it's a pretty perfect X ray but since it's been happening over time he suggested physical therapy to teach me how to re-learn how to move my back and such while I'm sleeping. Really?.. I suggested Chiropractic and he wasn't too keen on that idea. I'm still now sure why but ya-know what? I'm not too keen on the physical therapy idea either. First of all, my husband just had his entire spine reconstructed. For the most part he is unable to do anything except walk a few times a day short distances and sit up for 15 minutes at a time and that's it.. I also have a home and seven dogs to care for. Would someone like to tell me when I am supposed to fit PT in my schedule? Yeah, not happening right now. I also think a chiropractor may be able to better manipulate my spine better and help more than stretching? I am stretching now and it hurts! why would I want to do more of that? So I think I will wait until Mr L. is back on his feet more and try the local chiropractor first. Will keep you updated. Oh yeah, I haven't been feeling well in weeks worse than my usual not feeling well from all my other health issue's. Turns out I have sinus infection one million trillion and five so I am back on antibiotics yet again. My poor stomach.

Since Mr L's birthday was on Monday and we had all this doctor stuff we had to do we decided to celebrate on Sunday. Of course he really can't go anywhere or do much so I made him a nice dinner and invited our friends and neighbors Bill and Linda over for dinner. I made my home style meat loaf, glazed carrots, herbed string beans, mashed taters with gravy and for desert I bought Mr L one of his favorite cakes. An Italian cream cake. It was delicious! Or so I am told. We had a really nice evening with Bill and Linda and Mr L was happy which makes me happy.

Here are a few photos from Sunday nights dinner. 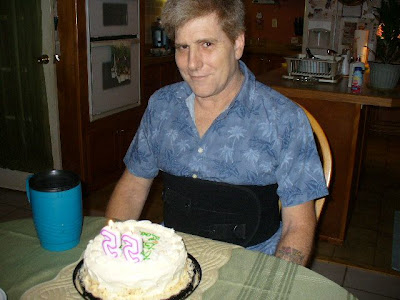 This is Bill, Linda and Mr L 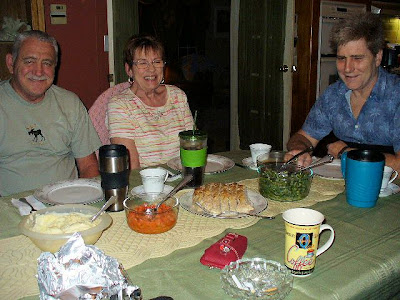 Myself and Mr L 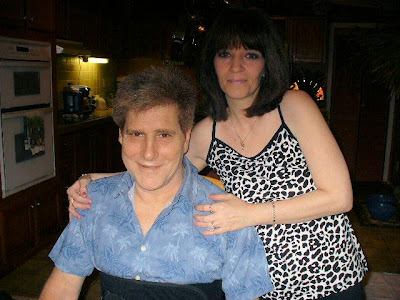 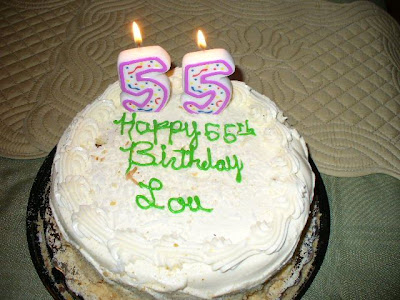 and one more of me and my love 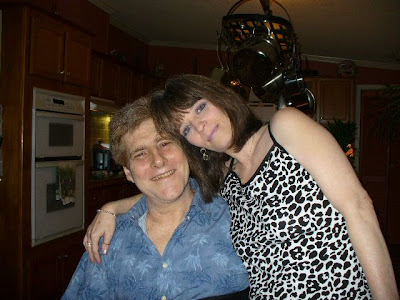