What a week it's been and it's not over yet... On Wednesday evening, our little girl, Lady... this sweet darling right here 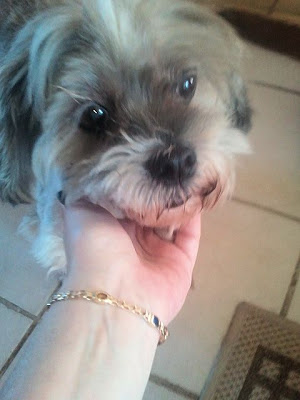 had another seizure. This is the second one since November. She had the first one  the night of Mr Lou's spine surgery. That was a terrible night and once again, I thought she was going to die but within a half hour or so she was 'fine' just walking around as if to say, "whats the problem? Gimme some food." and I did just that. She polished off some canned food which she's not supposed to have because she's diabetic but at that point I didn't care.. She was breathing normally and eating.. I spoke to the vet about her today an we are going to take her in for an 'overhall' and see whats happening... 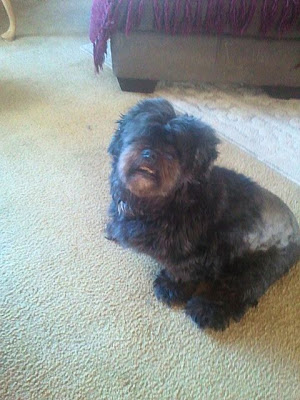 had a very very messy bum.. You moms and dads out there, think about "explosions in the diaper and having to put your baby in the tub because nothing less than a bath would clean it all up"..So, I took the razor out, shaved up his little butt, used a box of wipes and he was all clean an set to go, or so I thought. Later that day the whining started with Shadow running and plopping down quickly on his behind. Not uncommon when you shave their butts so I didn't think anything of it until..... Thursday evening when Shadow was now crying, loudly, spinning in circles, trying to reach for his behind.. I could not figure out no matter how hard I tried what could be wrong.. After all, I only shaved his hiney like I have a million other times. I decided to grab the razor again and shave higher up his back, maybe I missed something I thought but, nope. Couldnt see anything wrong. I pulled on him, pinched him, poked him and nothing. I couldn't make him cry. By 2 am I'd had it.. So first thing this morning in the very cold and windy weather, up to the vet we went.  Dr. is sure it was his, excuse the term, 'anal glands as they were pretty full'. He cleaned them all out, Dr also pulled, poked and prodded Shadow to no avail and it was decided that his glands were probably  irritated. Shadow got a cleaning and a shot of steroids and some pain meds when we got home. The steroids take a while to have an affect and by approx. 7 pm he was finally resting comfortably and sleeping. 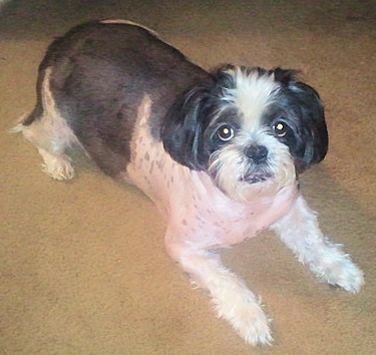 began to scratch himself as if he had flees. Now I KNOW none of my dogs have flees but the way he was scratching made me think it just may be possible he picked one up in the yard. So I began hunting, sifting through his hair but couldn't find anything.. Bailey continued to scratch and I continued to look. By Thursday I couldn't stand it anyone, out came the razor and now Bailey is bald.. poor baby but as I knew, no flees just dry irritated skin. Last night Bailey was itching so much, he was scratching his side raw and making himself bleed so while I was at the vet today Dr gave me some steroids for him so the itching will calm down. This skin problem is not uncommon with my little guys. They've had issue's all their lives. It usually goes back to food problems but not with my guys. Every once in a while one of two of them just gets itchy and can't stop scratching. I gave Bailey his first dose today and tonight hes better, hardly scratching at all.

When I got home from the vet today, hubby saw how tired I was and knows that I've been working on a migraine again or still? almost all day, which by the way is kicking up again tonight so, because he loves me and is a good husband he decided he would go to the store and buy some of the things we absolutely needed to get today. Its the first of the month and by this time we are pretty much out of almost everything from the month before. I was so grateful to him for doing this for me. Remember he had his spine reconstructed only two months ago and I wouldn't have let him go if I could have done it myself. He went and got what we needed and tomorrow we will go and finish up getting the rest of our groceries for the month.

I ended up falling asleep at almost 4 this afternoon and slept until six which made for a late dinner for Lou and the dogs. After I got everyone fed, the dishes cleaned up, pans washes and the rest of the groceries Mr Lou brought home today, I sat for a bit working on my knitting.. Busy week, busy weekend ahead. I hope you all have a wonderful and blessed weekend! :)