There Once Was A Ring.. The Beginning of Us..

Yep, there surely was..then there were two, then three etc... In the beginning, (no this isn't about the book of Genesis but this post may be as long) Mr Lou and I were dirt poor broke.. When we got together both our lives were pretty much a mess in all area's.. You could say we were a "hot mess".. add to that, that we had almost no money. We moved into an old home in a town called Fair Lawn in NJ. First we took the upstairs apartment which had been redone. Small but it was nice and then the bottom floor became available and it had 3 bedrooms instead of 1 which we needed because at  the time my 14 year old step daughter was living with us also. Before we moved downstairs, we were sleeping on the floor or on a futon  We had no bed, no mattress or anything.

One day, not too long after we moved in together we decided this was insane. We needed a bed. I got tired of being squeezed between Lou and a dresser that I would constantly kick with my knee during the night, every night. You can imagine what my one knee looked like all the time.

So off we went. We stopped at a storage unit on Rt. 46 in Lodi, NJ because 'some guy' was advertising new mattresses. We had $300.00 to our name and the mattress and box spring were only $150.00.. Nope, I didn't question where it came from nor how it got there I simply didn't care. All I knew was we needed it and we could afford it. So, we bought it.. What does this have to do with a ring? Im getting to it..

That same afternoon driving up the highway with mattress on the roof we decided to stop at the Willowbrook Mall (those from Jersey know all these places) and window shop. Heck, we had no money but it was nice to look anyway. Mr Lou pulled into a parking spot an just sat there. I couldn't imagine what was wrong but for some reason I didn't say anything. Thats huge for me because Im always saying something Finally, Mr Lou broke the silence and said "So, you want to get married?" (honestly, I've been proposed to on four occasions and this was the most unromantic yet most honest proposal I'd ever had an my answer was equally honest and simple) I said "yeah, I do".. Next thing I know we are standing in Macy's looking at rings.. Gold and diamonds were no where near as expensive as they are today but when you only have $150.00 in your pocket those rings might as well have been a million dollars. So we sauntered on over to the "cubic zircon" counter and it was there I fell in love with a ring. Not too expensive, no the diamond in the middle was not real nor were the ones down the side but I loved it and it was affordable and I knew Mr Lou wanted me to have a ring. So we settled on that one and bought it..

Over the years, I have no idea what on earth happened to this ring but it looked like it had been hit by a mac truck, it was so misshapen  the crystals on the sides were falling out and the big zircon in the middle was so loose you could spin it. I tried for a long time to have it fixed but every jeweler I went to said "no this can't be fixed" I was heart broken but I had to accept it. That started the parade of rings as I like to call it..

This is replacement ring number one. 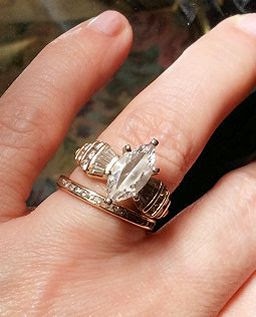 Which I wore for many years but it wasn't "my ring"..

Next up, replacement ring number two because I was getting bored with number one. 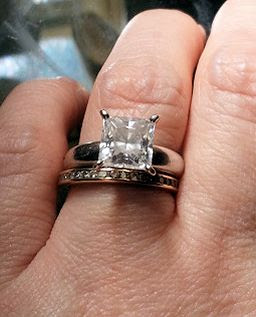 Also very pretty but again, not "my ring" which lead to replacement ring number 3. 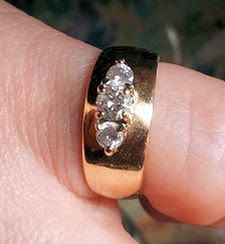 Now this ring is special to me because Mr Lou always said he would buy me real diamonds one day (not that I needed them) and so he did. The only trouble with this ring is, the size it too small and it's more a wedding band than an engagement ring. I plan on having it sized up and wearing it on another finger..

Two weeks ago I FINALLY found someone with enough guts to fix my original ring which I got back just today and here she is in all her beauty. 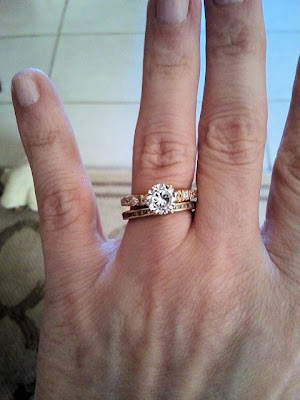 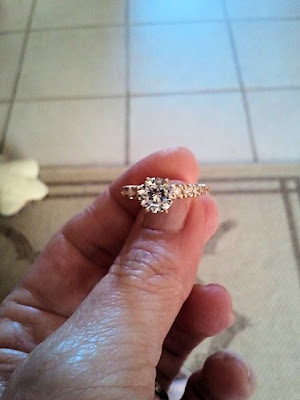 No she doesn't have much monetary value, and no her stones are not real but to me? She is absolutely priceless and I can not tell  you how wonderful it feels to have it back on my finger and to look down and see it and remember that sweet, yet most unusual although honest proposal fifteen years ago....