Good evening everyone.. It's Monday night that I am writing this post. Our weather here is a bit bi-polar, not sure if it wants to be up or down. We've been having cooler weather which I love and then today and tomorrow it's in the mid 70's until we drop down again. So as I am writing to you, its a bit cloudy outside as it has been for a few days, humid and warm. I even have my air conditioner on because it hit 78 degrees inside my house. Sipping on my coffee and decided to visit with you for a while.

In my last post I brought you up to the beginning of October when Lou and I remarried in the Catholic Church. I do hope you got a chance to read that post. Now let's move on a bit..

The rest of the month was a bit tough. I had a few doctor appointments which went no where and then on October 28th, the day I've been dreading for a long time finally came.
We lost Onyx on that day. 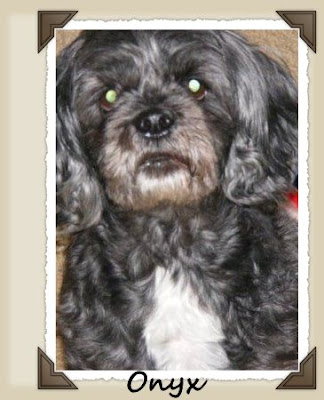 Most of you know my dogs are like my children. We have spent the last fourteen years together pretty much twenty four -seven. Onyx was fourteen years old just three months shy of his fifteenth birthday. He'd been having trouble with his back legs for quite some time due to age. Well on October 28th Onyx began to scream in pain and I knew in my heart it wasn't good and it wouldn't end well. It seems that he popped a disc in his spine straight up into his back to where you could feel it if you ran your hand over his back.

We rushed him into the vet but knew at his age there wasn't much that could be done. Surgery was offered but the chances of him making it through were very slim. Pain medication and steroids were offered but Onyx also had a very bad case of colitis and we knew that within twenty-four hours of beginning the steroids he would have then been bleeding internally. So in reality, there were no real options. So we lost him on the 28th and on the 30th I received his ashes back. Yes I have my dogs cremated.

To say I was devastated is an understatement. I knew that the reality was this day would be coming sooner rather than later but I just never expected it that quickly and it to be that day but then again, do we ever? I miss him every single day, I still cry and I expect I will for some time to come.  I do have Bailey, Shadow, Matty, Jake & Lizzy to still take care of but it doesn't matter how long or short you've had your pet, it never gets easier losing one of them..

The week before we lost Onyx, my husband, as most of you know, has had 7 back surgeries. 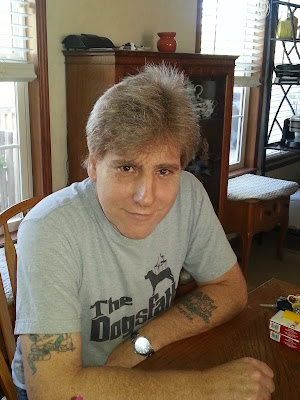 The last one was in 2012 where he had surgery up at Duke University in NC in which they reconstructed his spine using steel rods and screws from the tailbone up to the mid chest area. We thought we were good. Not so much.. Life unexpected, as it usually is, has thrown us another serious curve ball. Lou had heard a very loud crack in his back in the beginning of the month but with everything going on with the wedding he tried to ignore it as much as he could. Finally, it could be ignored no more. So he and his best friend Bill trucked on up to Duke last week. And unfortunately that crack that he heard weeks back turned out to be a cracked rod in his back.. The titanium steel rod, which I still can't wrap my brain around how that kind of material can just snap as it did, snapped directly in the middle of the rod. So now, he is slated for surgery Dec 11th, the day after his 57th birthday. Nice birthday present aye?

Well friends, I think thats it. I think you are all caught up from my very last post on February of this year. I hope you will continue with me on my adventure I call my life through my blog and I will be writing to you soon :)