It's 5 pm on a cloudy Saturday evening. The sun sets now very early so that by 5:30 pm ET it's dark outside and when it's cloudy it seems the darkness comes that much sooner. Once again, I am sitting here in the serenity of my living room with a nice cup of coffee after a long day of errands and chores..Resting my feet and bones so, I thought I'd sit a spell with you..

In my last post I brought you up as far as June. July and August are for the most part a big blur to me as I was besieged by a constant migraine headache every single day for two months. Yes, thats what I said. A migraine headache every day for two months. Many trips to the doctor, many trial and errors with medication. I finally ended up with Hydrocodone for pain when needed. I try not to need it at all because my central nervous system doesn't seem to like the hydrocodone much. Suddenly one day in September they simply just.... stopped... no good byes, no see ya later just... stopped and I have to tell you I was immediately grateful to see them go. I still deal with a daily headache, mostly sinus and pressure headaches as the nerves in my neck seem to be causing them as well but the migraines? Adios Amigos except once a month and for one day.. THAT I can handle..

The rest of September was spent preparing for another wedding. Whose you may ask? Well, mine!
You see, my husband and I are Catholic and since we had both been married before and then remarried outside of the Church without an annulment we weren't able to marry in the Church we both love so much. In order to do that we had to put in paper work for an annulment of both our first marriages. This can take anywhere from six months to many years. Unfortunately for us, it took almost three years but , in June of this year both of our annulments were approved by the church which now made us free to re-marry in the Church. At first I decided I wasn't going to buy a wedding gown or anything like that because after all, I had been married before so, I thought maybe just a simple dress. While out shopping for my 'simple dress' about a week before our ceremony my husband very sweetly told me that since in the eyes of the Church we had never been married before he would like me to buy a wedding dress since I am after all "a bride". "His bride" whom he never had the chance to see in a wedding gown. Truth be told, at first I kind of said no, it wasn't appropriate, I didn't think it would be right yadda yadda yadda. Does anyone say yadda anymore? Who cares, I do.

That was until we got to the local bridal shops and I saw all those beauuuutilful wedding dresses. Ladies you KNOW what I'm talking about here. But, I also knew in my heart I did not want something extravagant and I definitely didn't want something white. My husband, Oh how I love him, wanted to help pick it out. Heart melt. But he picked a "white" gown that was very, very pretty. So to please him I tried it on and I have to say it did look beautiful but there were so many alterations needed by the time I would have gotten done paying for those, the alterations would have cost more than the entire dress. So I put a stop to the insanity and said while I appreciate and love him, I want something simple and ivory. I finally hit on the perfect gown. Perfect for me. I just needed a wrap of sorts for my shoulders as it was strapless and I refuse to go to Mass with a bare shoulders. Yaknow, respect for the Lord and all.  The bridal shop happened to have a wrap and in the matching color it just needed some snaps put on it.  We had a very and I mean very small Nuptial Mass with our best friends Bill & Linda who stood up for us along with a photographer. I wished my family could be there but they are in NJ and I understand they can not just ditch off work and come running down here. So it was OK with me and I had the small setting I wanted. Here are some photos. 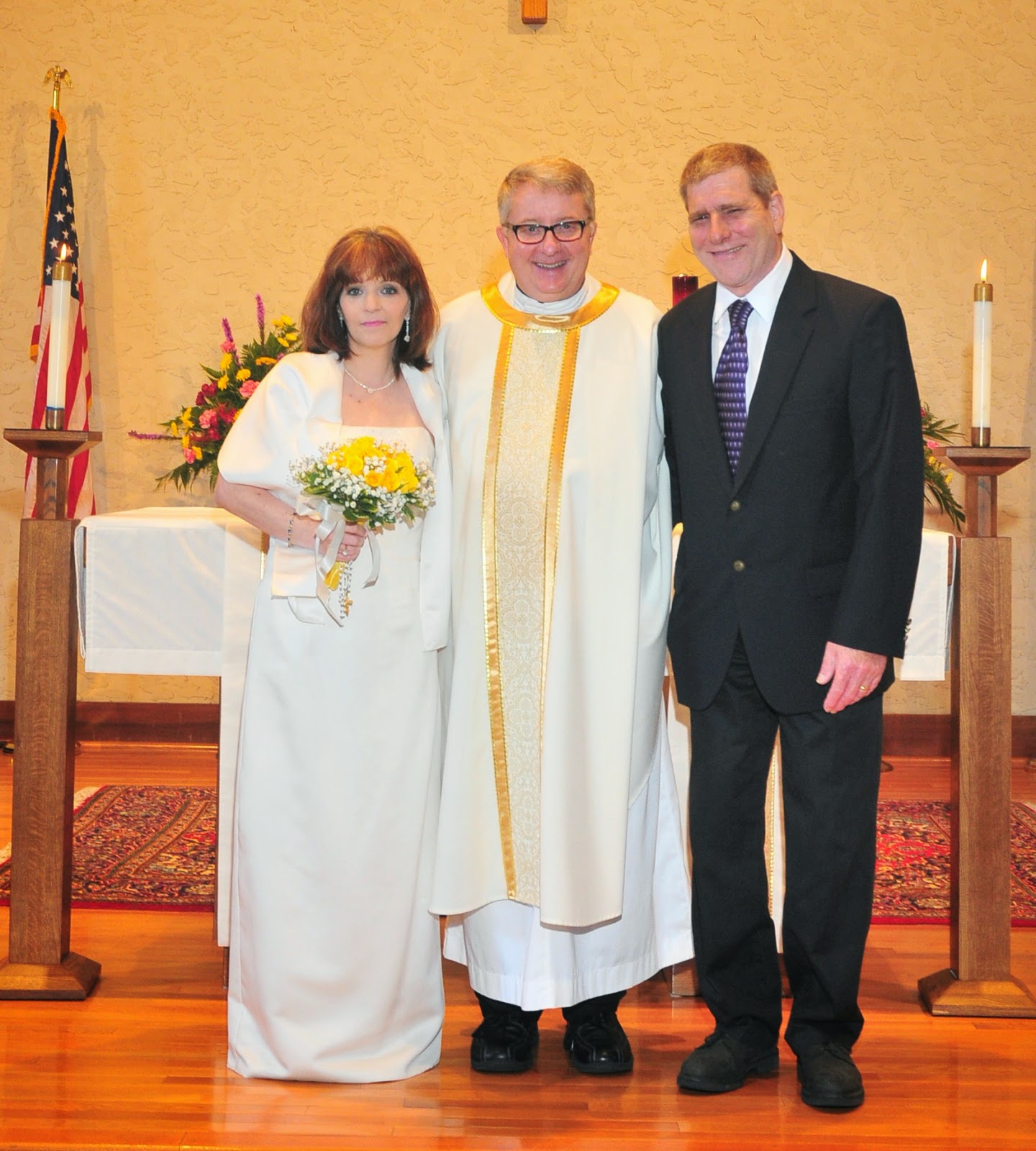 Myself, Our Priest Father Tim and Lou

Lou and I exchanging vows 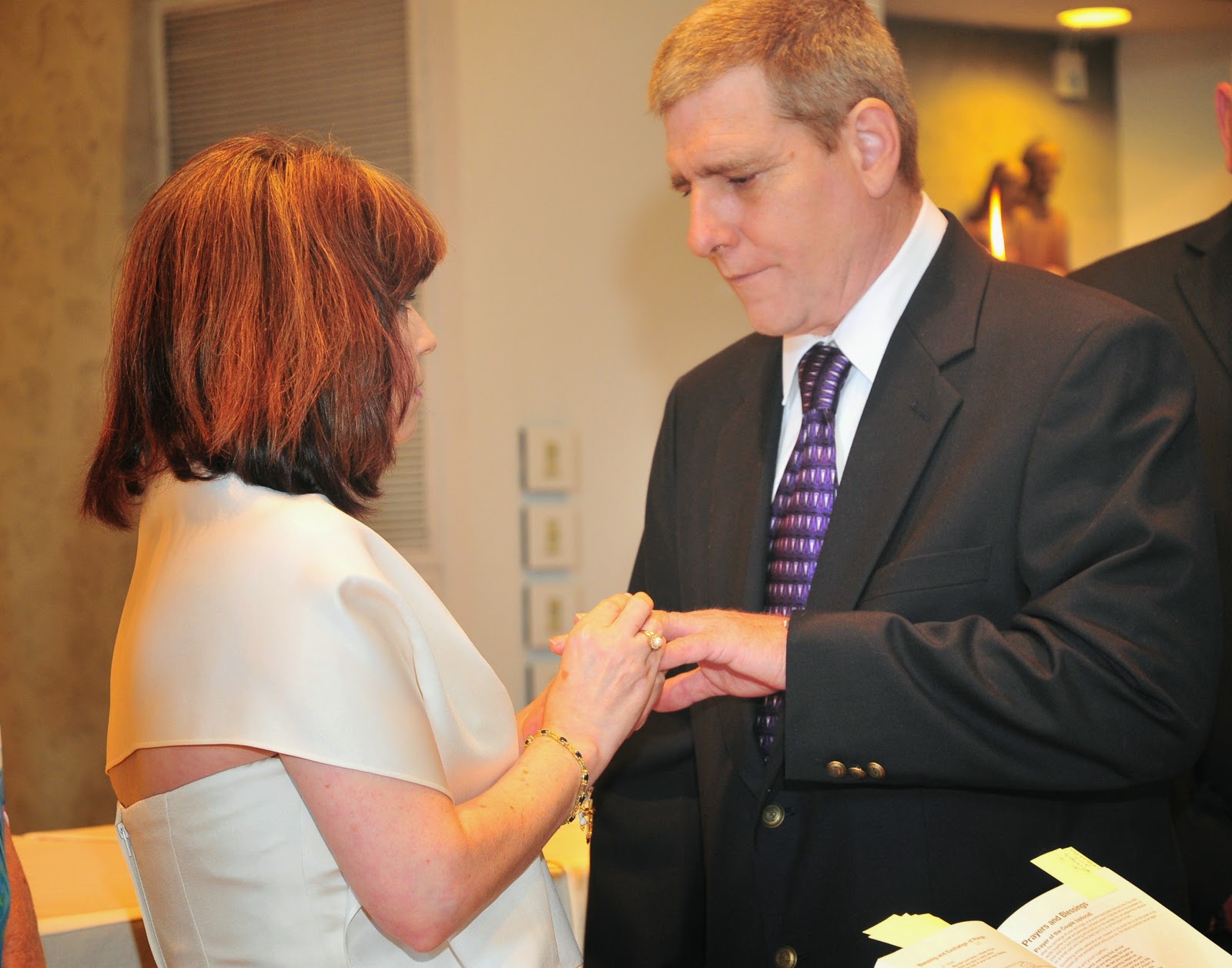 From right to left, Bill, Lou, Myself and Linda 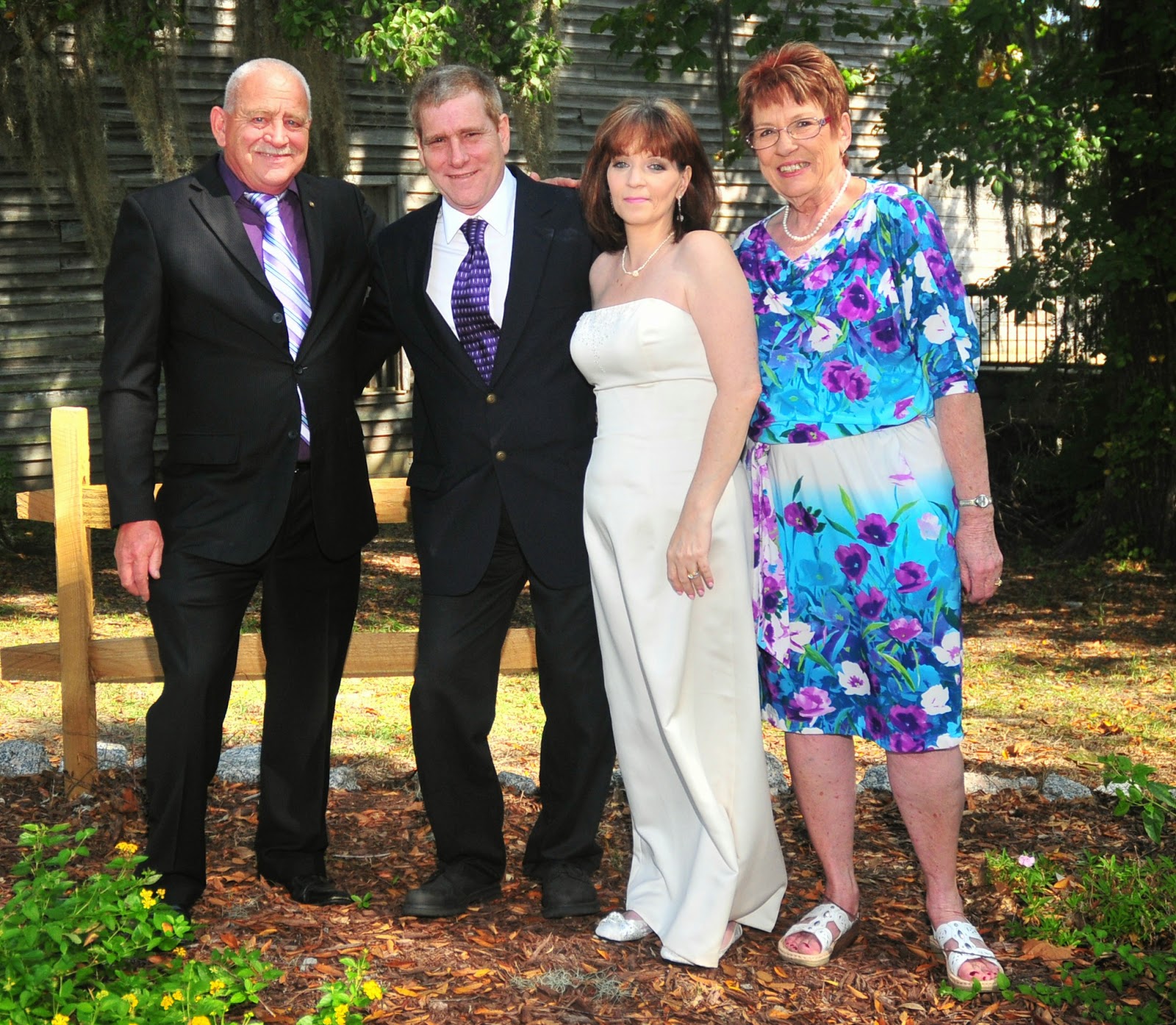 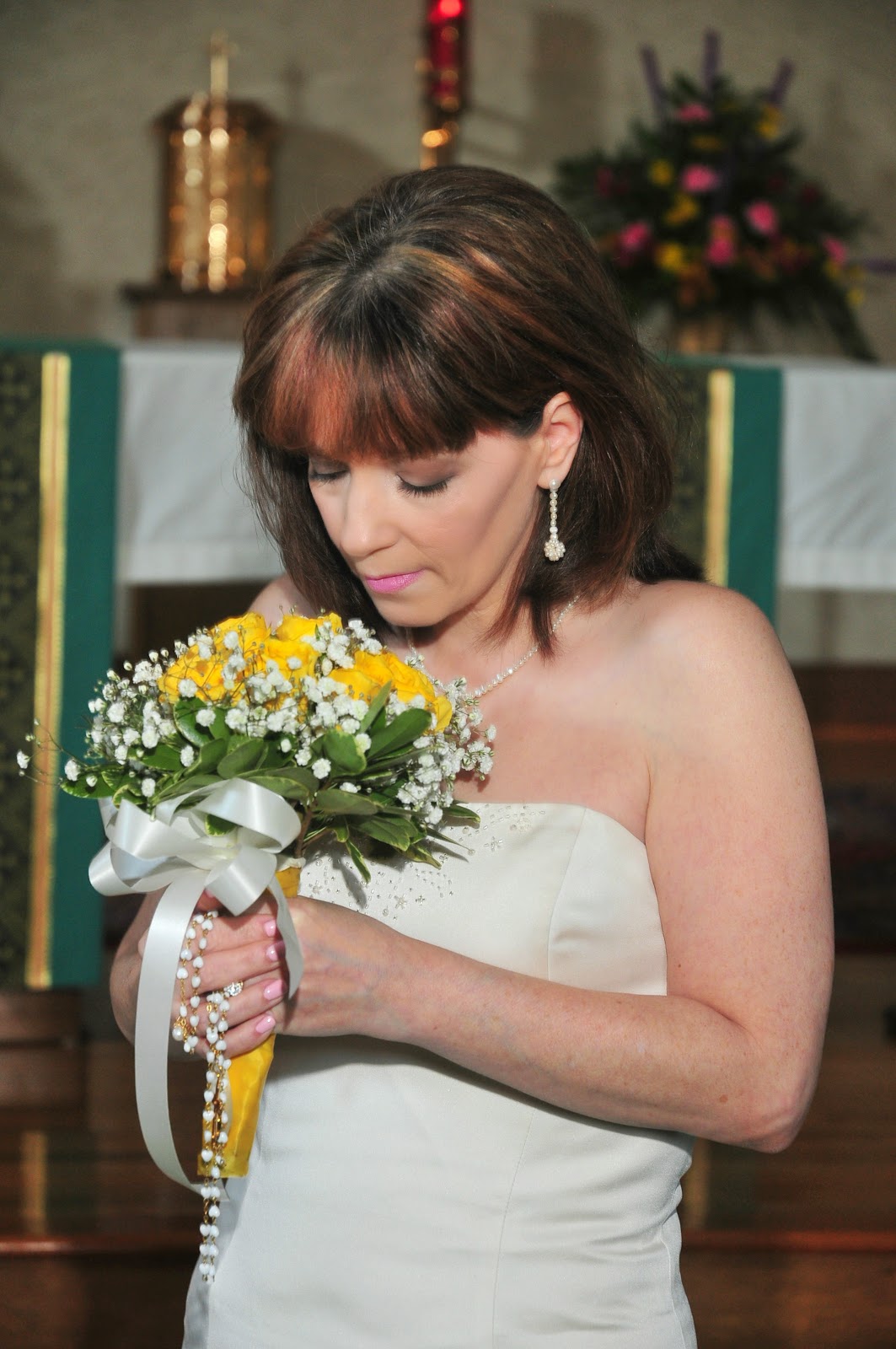 Photos in the Historic District 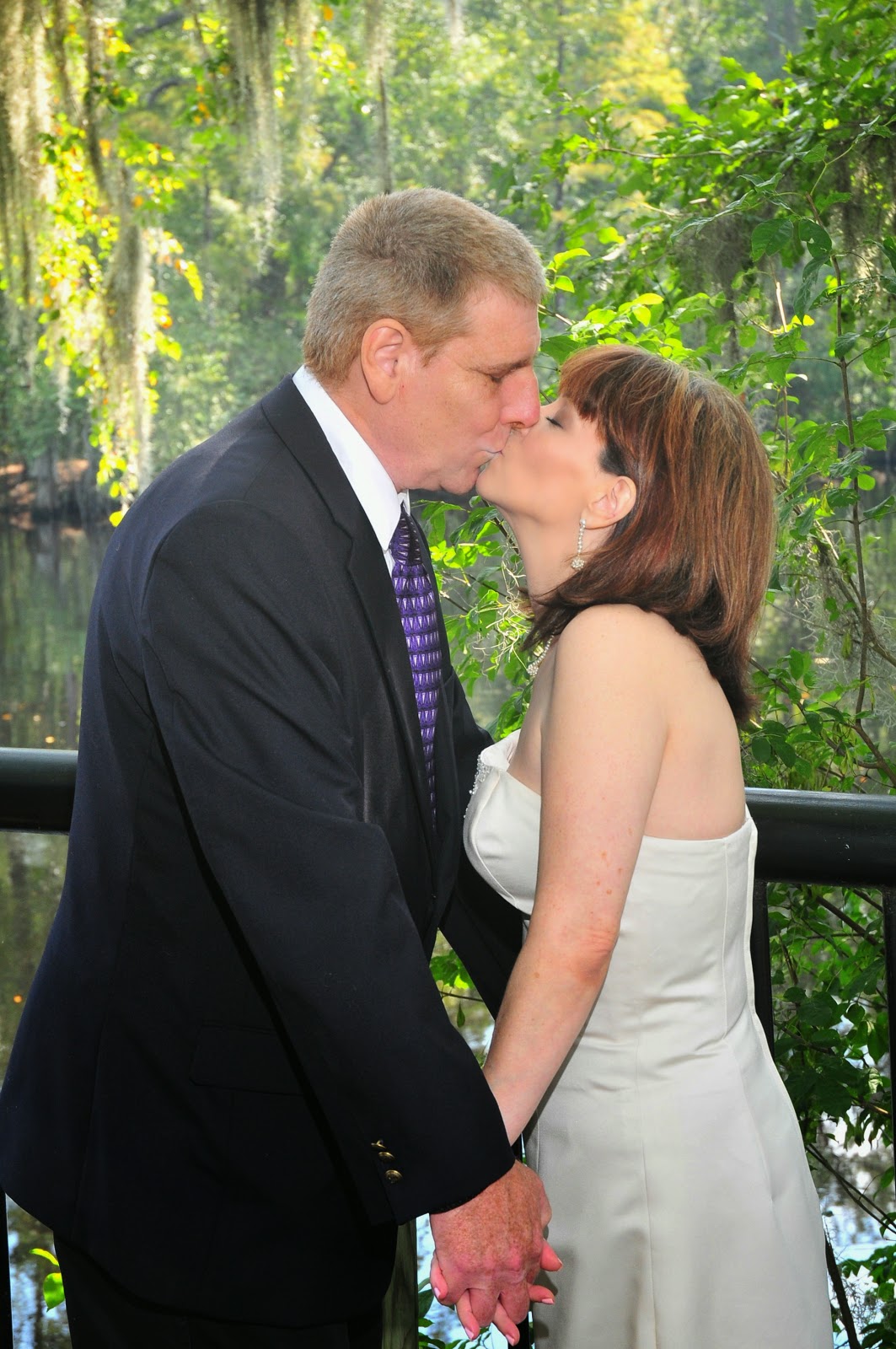 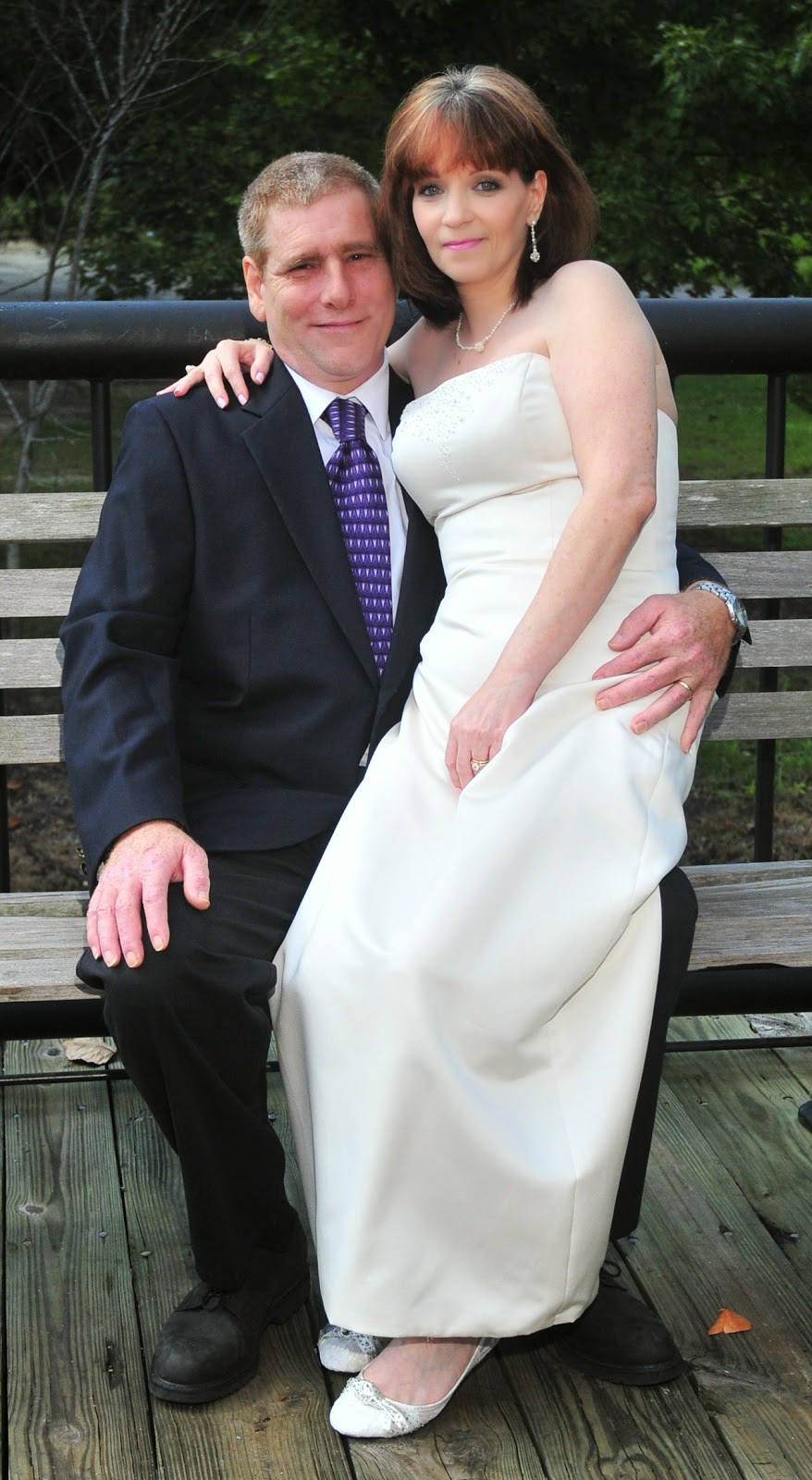 We re-married in the Church which was also our sixteenth wedding anniversary on
October 2nd, 2014.

I hope you enjoyed this post. I will be writing more to bring you up to the present..