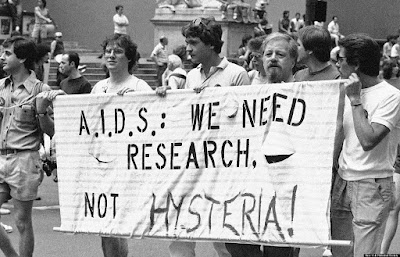 It was the 80’s and I was a teenager. All of eighteen when I learned of AIDS. I know it had been around before that but as a teenager who ran fast with a fast crowd we didn’t exactly pay attention to the news. In 1988 I was working full time for an upscale auto collision shop in New Jersey. More and more AIDS was being brought to the forefront as was the hysteria surrounding it and in all honesty , it was frightening. At the time I didn’t know anyone who had AIDS but that was about to change.
One day a customer came in who happened to be the daughter of one of our biggest accounts. She had an auto wreck and needed her car fixed she also, had AIDS. Thats when the AIDS fear entered my life. No one in the shop would get in her car to get her insurance information out of it because she had bled in the car and everyone was afraid. I admit, at first I was a bit afraid myself but that night I went home and decided to do some research and learn more and so I did..
Next morning I tried in vain to educate everyone in the office and the shop that they had nothing to fear that once “it dries it dies” but my words fell on deaf ears. Finally I got so angry I called every male in the place (I worked with 15 men) a pansy ass and went into the car and got the information myself. Well, you would have thought I was going into an unknown world. They all stared at me like I was insane.. To their surprise. I survived, the car was fixed and me and Doretta (yes that was her name) became friends.
Fast Forward a few years and I got sick with Lyme Disease. By 1994 I was too sick to work but I was also full of anxiety and frustrated to no end sitting home all the time sick and in pain just staring at the TV. Someone suggested that I should try volunteering to see what I could actually get my body to do. I did just that and I picked a soup kitchen dedicated to AIDS patients at a church about twenty minutes from my home. I went two times a week for about a month when my body decided it had enough.
I will tell you though, those two months were the most rewarding two months of my life. I got to meet these people that others were so afraid of. Turns out with education and compassion there is nothing to be afraid of. I got to see life through their eyes. I remember a woman who would come twice a week on my days and she was very sick. She didn’t have long to live. I would arrive and there she’d be sitting in her chair with her IV pole  usually alone reading a book. We would exchange a smile or two when I served her a meal and finally one day I sat down and we began to talk. I never asked her how she contracted AIDS because it didn’t matter.. She was no different from me except that she was dying faster than I.  I don’t know if I brought anything to the days she had left but she had given me a gift that has lasted these twenty some odd years and will until its my time to leave this earth. She allowed me to know her, to be kind to her and to be a friend to her. I will never forget her or her beautiful smile.
I will be forever grateful for my time in that soup kitchen and if I am ever able to volunteer again  I would do it all over the same way.