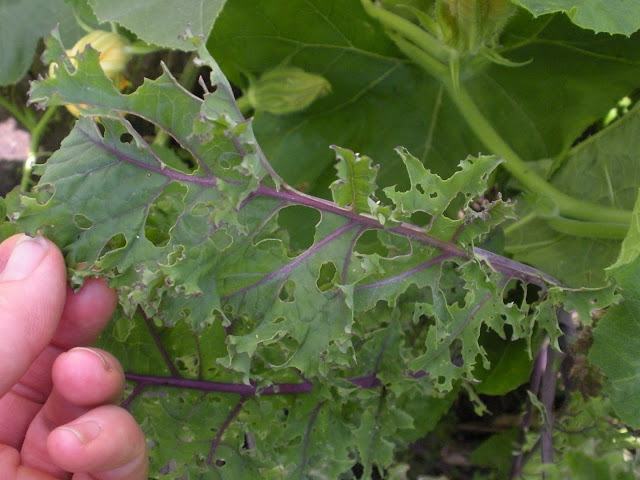 Ahhhhh... Life in the country..... Let me tell you how I spent a lot of my day on Tuesday.

See that photo up there? It's one I snagged from the web because I forgot to take my own. That is a photo of a Kale leaf that has been decimated by a cabbage worm and unfortunately almost all my beautiful kale leaves I am growing now look like this. Why? Because I am a novice gardener and didn't know anything about cabbage worms until last night. I originally thought it was white flies eating my leaves so last night after sun down I went and doused each plant, each leaf both front and back including the stem with Neem Oil hoping it would get rid of the problem.

So on Tuesday morning I went to check the plants and I had cabbage worms all over the plant leaves on every single kale plant! It wasn't white flies after all but apparently the Neem Oil did it's job because I hadn't seen any cabbage worms at all when I had looked before...

I spent a lot of time Tuesday morning picking off cabbage worms off all the kale plants and found a few in the brussel sprout plants as well. Then I watered the whole garden.

In the evening once the sun went down I had another issue to deal with which if you live in the South you're all too familiar with and that is fire ant mounds. They show up as soon as the weather gets the slightest bit warm every year. For those not familiar, fire ants are tiny little reddish brown ants and they bite and sting you. The sting hurts like hell and then it gets super itchy and turns into what looks like a little white pimple on your foot or where ever you got bit and it's not just one bite. They will swarm your foot in milliseconds. There have been people who have died from getting so many bites because  they were either allergic to them or the amount of poison injected into them just overwhelmed their bodies.

Killing fire ants is not easy. There are few chemicals out there that actually work and I can't use them because of my dogs so I had  to find an alternative. A few years ago I took the advice from Constance over at Cosmopolitan Cornbread and purchased a bottle of pure orange oil off Amazon. She mixes it with water and sprays the mounds at night and by morning they are dead. The important part is to saturate the entire mound and perimeter but most especially the peak of the mound because that's where the wicked queen is. If you don't get her you're wasting your time. And guess what? It worked!

So I have already stocked up on Orange oil for a bit and tonight I went out in the yard and killed a huge mound at the bottom of my back steps that seemed to pop up over night..

Afterwards I went back to check the Kale and Brussel Sprouts plants before I headed in for the night and sure enough I found a couple more cabbage worms. Not nearly as many as this morning but a few. I picked them off and dropped them in a small bowl of soapy water which kills them... I see this will become my new routing in the morning. Water, look for pests.. In the evening, check for pests and fire ant mounds..

Ahhh, the joys of country living and gardening......

Email ThisBlogThis!Share to TwitterShare to FacebookShare to Pinterest
Labels: Garden 2021