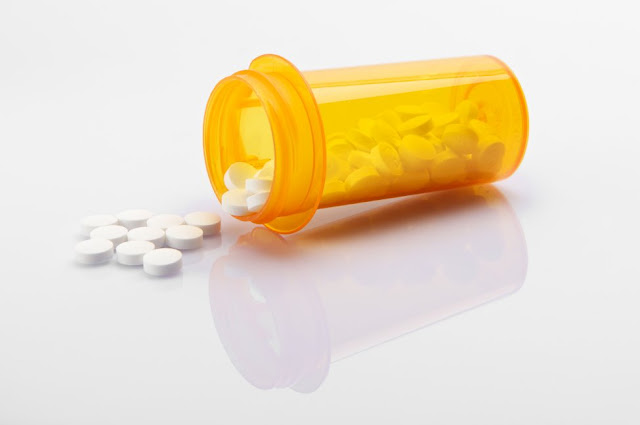 If you read my post on Monday of this week then you know I had mentioned I was having a hell of a time with constant migraines. I finally asked my doctor last month to give me something. I couldn't take the pain and sickness anymore. Tylenol does nothing for a migraine by the way and I can't take any of the migraine medicines because most of them have aspirin in them and I am allergic to aspirin. I also tried Ibuprophen and that didn't help either. I was out of options. All except the one I REALLY didn't want. I am not a pill person. I will suffer until most people would have jumped off a cliff before I pop a pill but I am finding as I age I am not able to handle the pain that is my body as well as I used too.

So my doctor prescribed me Tramadol 50mg tables to be used when I have a migraine. Two weeks ago on a Sunday morning a migraine began and this sucker ramped up so quickly I didn't even have time to think. By one in the afternoon I couldn't handle the pain anymore. I thought if I didn't get some relief soon I was goin to die from the pain itself. So I reached over, grabbed the bottle of Tramadol from my end table draw, took the pill in my hand, said a prayer and swallowed it. Okay, I crushed it up because I can't swallow pills but you get what I'm saying here. I had no clue what I was in for next. What did I know? I don't DO pain pills. I have NEVER taken anything stronger for pain than a Tylenol.

It took THREE hours for the pill to help the pain but along with that I was SO sedated I felt like I had been put under for surgery or something and I was SO dizzy I was seeing double. I literally could not even watch the TV because I was seeing TWO of everything!..I wound up spending the entire day and night in bed not because of the pain but because of the effects from what was supposed to help the pain. By the way, it did help the pain but ontop of the frightening dizziness and sedation it also made me nauseous and I still dealt with hot flashes every two hours as well. I was NOT in a good place.

THIS is why I hate anything that has to do with pain killers. I do not like feeling out of control of my own body and I certainly was. I was also thanking God for Lou having had installed a safety bar in our bathroom last year near the toilet because if it hadn't been there, this day I would have taken a header a few times right into my tub. It was absolutely horrible. I woke up at 11pm that same night and I was STILL dizzy and somewhat sedated. This is almost twelve hours later.

The next day I woke up and I felt HORRIBLE. Nauseous, weak, my legs felt like shaky little bird legs, exhausted and a little light headed. I called my doctors office and explained to the nurse what had happened. She called me back a few hours later and told that the Tramadol doesn't come in anything less than 50mgs but I could cut it in half or even quarter it if I want and to take it soon as my migraine starts and not wait hours like I had.

So I guess when another migraine hits which it inevitably will I will start out with a quarter pill and if it doesn't help within an hour I will take another quarter....

Getting older does suck, don't let anyone tell you different.